Running comes naturally to humans. We are literally born to it. When kids run, they just run and experienced runners marvel at how naturally they fall into the perfect form for their bodies.

Let’s assume that you aren’t a kid. If you are a beginning runner and wonder if you are doing it right or been running for a while and are now beginning to wonder if your running form is the cause of issues you are having then read on.

For the first two-thirds of my running life I didn’t pay much attention to my running form. I rarely had problems, and when I, did they turned out be be from badly fitting shoes or pushing myself to far, too fast. But at some point the higher weekly mileage and my aging body conspired to bring my bad form habits to the center of my attention. So, I became a student of running form.

Googling the words will produce plenty of running form suggestions and you can look at them all. In the end, running form is really personal. Most people promoting name-brand running forms won’t tell you this but following a set form movement for movement might be worse than whatever you are doing now. There are so many body types that a single form or unamed collection of movements can’t possibly be one size fits all. Read on about the suggestions that collectively I’m calling Jrunning but do some research and experimentation on your own. What’s right is what works for you, not what is most popular or made the best sellers list.

Jrunning was inspired by a book that, amazingly, has nothing to do with running. According to Gokhale’s book 8 Steps to a Pain-Free Back: Natural Posture Solutions for Pain in the Back, Neck, Shoulder, Hip, Knee, and Foot, most people in modern society have an ‘S’ shaped posture which leads to health problems, especially back pain. Think of “the slouch” that so many of us have.

When she studied indigenous groups around the world (and she really did this on her own) she found a different posture and no back pain. Their “secret” was a spine that was straighter at the upper back and pushing more towards your bottom instead of your front. She describes this as a ‘J’ shaped spine, hence “J Running”. Start at the top

Using Gokhale’s recommendation, lift your shoulders, roll them backwards then let them fall naturally downward without rolling forward again. If you point your thumbs outward it helps you feel the correct position. When you are running and swinging your arms your shoulders shouldn’t noticeably twist or fall forward. If you maintain this stance, your chest cavity will actually have more volume allowing for easier breathing which is vital for everything from better endurance to preventing muscle cramps. This position is key to straightening your spine at the top  which is a key component of the J posture.

Now think about your spine. You’ve got your shoulders in the correct position, now imagine there is a string attached to the top of your head and your body dangles below it. Your spine remains tall and straight until you approach your hips. Some people actually are taller when standing this way. When you run, your spine should remain straight but imagine that a puppeteer is dragging the string forward so that you are tilting forward. However, don’t go off running yet. There’s more about the tilting forward part below.

End at the bottom

Now for a big difference. There are running forms out there (feel free to Google the term) with fancy names and many articles on “proper running form” that will tell you to lead with your hips. The J Running form does just the opposite. I am not suggesting that you run with your bottom sticking out like an eager baboon, it’s more of a mental image that helps guide your posture. Think of your spine as a letter ‘J’ the curve or hook of the letter points in the direction your butt muscles should be pointing. As your are standing still and straight (following the steps above) slightly shift your butt backwards imagining a letter J. As you run don’t let your hips shift forward. If this happens you may even feel a difference in your quadriceps which may suddenly feel tight. One last hippy thing, as you run keep your hips centered vertically but allow them to twist slightly with each step (think of a slight sashay). Locking your hips so that they don’t twist at all can lead to all kinds of muscle issues as you clock up the miles.

One more adjustment before we move into the overall running posture. Contrary to most running form advice, don’t stick your chin up. That string is attached more toward the back portion of the very top of your head, not toward your eyes. Look forward (or down at the rocks and roots if you are on a trail) but don’t use your chin as a an aerodynamic wedge. If you think of your head as a square, when you are standing or running, the bottom of the square shouldn’t be parallel with the ground.

Now fall on your face

Not really, but what I am going to tell you to do next will make you think that. With the J Running body posture in your head lift a knee slightly and fall forward. You should feel yourself leaning forward at your ankles, not your waist. However, in keeping with our keyboard denizen approach to this discussion, your body is not trying to maintain a  rigid straight line like a forward slash “/”. Remember the curve of the J. So while you are leaning forward from your ankles make sure your hips and butt are shifted slightly behind like a bump halfway along the forward slash.

The rest is old fashioned

The rest of the form follows most of the other running form suggestions you will come across. As you swing your arms, don’t allow them to move right and left, crossing your midsection. They should generally point in the direction of your motion and forget all those stupid posed shots of fake runners all over the internet showing tightly clenched fists. You aren’t boxing. You should expend as little energy as possible on your hands.

Your legs should work like bouncy springs. Don’t drive your knees forward. Don’t kick up your heels intentionally behind you or push off forcefully from the balls of your feet. Your feet should contact the ground under your hips, not in front of them to avoid overstriding. This isn’t a 100 yard dash form, it’s for going the distance (whatever that is) as efficiently and painlessly as possible. 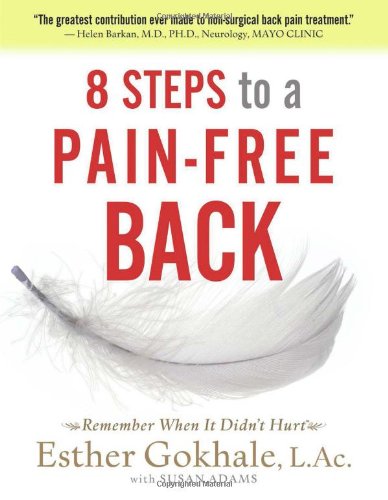 8 Steps to a Pain-Free Back: Natural Posture Solutions for Pain in the Back, Neck, Shoulder, Hip, Knee, and Foot

I mentioned, the balls of your feet, but I am going to completely stay out of the foot strike debate. J Running is about overall body posture. There is plenty of advice and flame wars on the internet on the evils or efficiencies of heel striking. Truthfully, I have found that some people seem to be natural heel strikers, others naturally land forefoot and most land somewhere in between (usually just called mid-foot). Some runners have learned to heel strike somewhere in their foggy past and shouldn’t and some people have injured themselves while attempting to force a forefoot strike with every stride. IMHO, if you follow the J Running form then allow yourself to do what feels natural with your feet your body will show you what’s best for you.

Check out Gokhale’s book for all the details on her posture research. It’s excellent! 8 Steps to a Pain-Free Back: Natural Posture Solutions for Pain in the Back, Neck, Shoulder, Hip, Knee, and Foot.

Gregory Sherrow
Gregory is a life-long runner, especially when it comes to trail-like surfaces. He just happens to have spent the last dozen years or so working from home so he never has an excuse to skip a running day (but does anyway).
running form